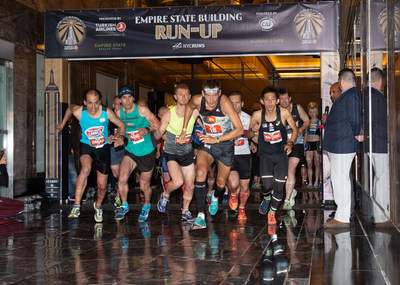 Thousands will enter for the bucket list opportunity to race up the 1,576 steps and 86 floors of the World’s Most Famous Building, but only a select group of approximately 125 runners will ultimately compete in the 43rd annual event. This year’s Run-Up will incorporate increased safety measures such as proof of vaccination requirements and staggered heats that will allow for ample space and time to reach the top.

"We are open for business and the Empire State Building once again invites athletes and tower-climbing enthusiasts to the most important tower run and the birthplace of tower running," said Anthony E. Malkin, ESRT chairman, president, and CEO. "This race is even more important as ESB is in the midst of its 90th anniversary year."

Those selected to participate in last year’s race which was canceled because of the pandemic, will be able to claim their lottery spot in 2021 at https://nycruns.com/race/esb2021. Spaces in heats will be available as many international runners will not be able to participate. Others interested in participating in this preeminent tower-running event will be able to register online at https://nycruns.com/race/esbru between June 1 and June 30. Runners who have applied to climb will be notified of their race status on July 10. Participation costs of $125 per runner will be charged only upon acceptance from the lottery.

Turkish Airlines, a leading global airline flying to more countries and international destinations than any other, returns for its third year as presenting sponsor of the Run-Up. In addition to serving New York’s JFK airport, Turkish Airlines will launch its 10th U.S. gateway at Newark International Airport on May 21.

Challenged Athletes Foundation® (CAF) will once again be the official charity partner of the ESBRU, with a designated heat for challenged athletes, as well as CAF supporters who run to raise funds to support access to sports for those with physical challenges. Those who are looking for a unique way to participate in this event can register to run with Team CAF.

New to the annual tower running event, On will participate in the building’s climb with a designated heat of running enthusiasts and influencers from around the country who are eager to ascend New York’s most iconic landmark. ESBRU content leading up to and on the day of the race will be available at @on_running on Facebook, Instagram, and Twitter.

This year’s event will be produced by NYCRUNS.

More information about the Empire State Building and its 90th anniversary celebration in 2021 can be found at https://www.esbnyc.com/90.

About the Empire State Building
The Empire State Building, "The World’s Most Famous Building," owned by Empire State Realty Trust, Inc. (ESRT: NYSE), soars 1,454 feet above Midtown Manhattan from base to antenna. The $165 million reimagination of the Empire State Building Observatory Experience creates an all-new experience with a dedicated guest entrance, an interactive museum with nine galleries, and a redesigned 102nd Floor Observatory with floor-to-ceiling windows. The journey to the world-famous 86th Floor Observatory, the only 360-degree, open-air observatory with views of New York and beyond, orients visitors for their entire New York City experience and covers everything from the building’s iconic history to its current place in pop-culture.  Learn more at www.esbnyc.com.  2021 is the 90th anniversary year of the Building which officially opened on May 1, 1931. Declared "America’s Favorite Building" by the American Institute of Architects, as well as the world’s most popular travel destination by Uber and the #1 New York City attraction by Lonely Planet it welcomes more than 4 million annual visitors from around the world.

Since 2011, the building has been fully powered by renewable wind electricity, and its many floors primarily house a diverse array of office tenants such as LinkedIn, Shutterstock, and Global Brands Group, as well as retail options like STATE Grill and Bar, Tacombi, and Starbucks. For more information and Observatory Experience tickets visit esbnyc.com or follow the building’s Facebook, Twitter, Instagram, Weibo, YouTube, or TikTok.

Empire State Realty Trust is a leader in energy efficiency in the built environment and sustainability space, with 76 percent of the eligible portfolio ENERGY STAR certified and 100 percent fully powered by renewable wind electricity. As the first commercial real estate portfolio in the Americas to achieve the evidence-based, third-party verified WELL Health-Safety Rating for health and safety, ESRT additionally earned the highest possible GRESB 5 Star Rating and Green Star recognition for sustainability performance in real estate and was named a Fitwel Champion for healthy, high-performance buildings. To learn more about Empire State Realty Trust, visit esrtreit.com and follow ESRT on Facebook, Instagram, Twitter and LinkedIn.

About NYCRUNS
NYCRUNS produces over two dozen races in New York City including their flagship event, the Brooklyn Marathon & Half Marathon; and one of the largest half marathons in New Jersey, the Newport Liberty Half Marathon. Their goal is to give athletes the chance to win their race by providing them with the best possible experience from the time they register until the moment they see their free finisher photos. Accurately measured, electronically timed, supported by a world-class medical group, staffed by a highly trained team, and with all the bells and whistles you might expect (and some you might not); their events are fun, vibrant, not overcrowded, and all about showing athletes a good time. Simply put, week in and week out, NYCRUNS puts on the best races in New York City, and can’t wait to see you Win YOUR Race!

About the Challenged Athletes Foundation
The Challenged Athletes Foundation® (CAF) is a world leader in helping people with physical challenges lead active, healthy lifestyles. CAF believes that participation in physical activity at any level increases self-esteem, encourages independence and enhances quality of life.  Since 1994, more than $134 million has been raised and over 35,000 funding requests from people with physical challenges in all 50 states and dozens of countries have been satisfied. Additionally, CAF’s outreach efforts impact another 60,000 individuals each year. Whether it’s a $2,500 grant for a handcycle, helping underwrite a carbon fiber running foot not covered by insurance, or arranging enthusiastic encouragement from a mentor who has triumphed over a similar challenge, CAF’s mission is clear: give opportunities and support to those with the desire to live active, athletic lifestyles. To learn more, visit challengedathletes.org or call 858-866-0959.

About Turkish Airlines
Established in 1933 with a fleet of five aircraft, Star Alliance member Turkish Airlines has a fleet of 365 (passenger and cargo) aircraft flying to 320 worldwide destinations as 269 international and 50 domestic in 127 countries. More information about Turkish Airlines can be found on its official website www.turkishairlines.com or its social media accounts on Facebook, Twitter, YouTube, LinkedIn and Instagram.

About ON:
On was born in the Swiss Alps with one goal: to revolutionize the sensation of running. Eleven years after market launch, On delivers industry-disrupting innovation in premium footwear, apparel, and accessories for high-performance running, outdoor, and all day activities. Driven by peer-recommendation, On’s award-winning CloudTec® technology and groundbreaking strides in sportswear’s circular economy has attracted the fastest-growing global fan base in specialty running — inspiring humans to explore through fearless performance, mindful innovation and purposeful design; empowering all to run on clouds. www.on-running.com