COLUMBIA FALLS, Maine, May 15, 2021 /PRNewswire/ — On March 16, 1962, Flying Tiger Line Flight 739 was on a secret mission, but disappeared. On board were 93 United States Army soldiers and 11 civilian crew members. Very little is known about what happened to the plane and its passengers, and due to the circumstance surrounding this mission, the names of those lost have not yet been added to the Vietnam Veterans Memorial in Washington D.C. However, today many families and loved ones of these heroes gathered in Columbia Falls, Maine, where national nonprofit Wreaths Across America (WAA) is based, to be present for the unveiling of a new monument dedicated to their service and sacrifice. 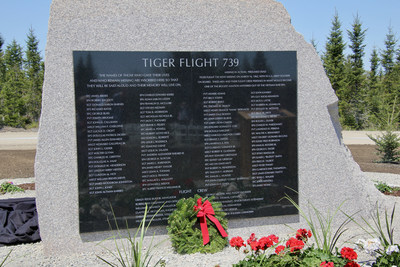 Today, a new memorial dedicated to all those onboard Flying Tiger Line Flight 739 was unveiled in Maine.

The new monument – made entirely of granite, standing 8ft tall, 9.5ft wide, 4ft deep at its base – displays the engraving of each of the 93 Army soldiers aboard, as well as the names of the 11 flight crew members, many of whom were veterans themselves. The inscription on the stone reads:

«Missing in action; Presumed dead. Flying Tiger Line Flight 739 went missing on March 16, 1962, with 93 U.S. Army soldiers on board. These men and their flight crew perished in what would become one of the biggest aviation mysteries out of the Vietnam War era.

THE NAMES OF THOSE WHO GAVE THEIR LIVES AND WHO REMAIN MISSING ARE INSCRIBED HERE SO THAT THEY WILL BE SAID ALOUD AND THEIR MEMORY WILL LIVE ON.»

The land where this monument has been erected was donated by WAA Founder Morrill Worcester and is located on the balsam tip land where brush is harvested each year to make veterans’ wreaths to be placed on the headstones of our nation’s heroes on National Wreaths Across America Day. «When I first heard the story about this mission, I was shocked to learn that nothing has been done for these families,» said Worcester. «I said that day, that we would do something to make sure these people are honored and remembered, and to hopefully give some closure to these families.»

The mission of Wreaths Across America is to Remember the fallen, Honor those that served and their families, and Teach the next generation the value of freedom. Today’s ceremony touched on all aspects of this as the names of each person aboard Flying Tiger Line Flight 739 were said out loud, and their names and story were etched in stone for future generations to learn about their service and sacrifice.

The video from today’s Facebook Live Broadcast can be found on Wreaths Across America’s Official Facebook page here. This is the first time that many of these families have met one another to share their stories and experiences stemming from that fateful day. The story of Flying Tiger Flight line 739 can be found here.

Leading up to the monument unveiling, interviews with family members were broadcast on Wreaths Across America Radio. You can hear their first-hand experiences regarding this historical moment in our country’s history and their emotional reactions to their family members being honored and remembered, 59 years later.

Wreaths Across America would like to offer a special thanks to the Worcester family for not only their donation of land, but their incredible work to prepare the grounds and install this new monument, as well as commitment to care for it long into the future.

A full list of names, pictures of the new monument, and broll from the unveiling ceremony are available upon request.

About Wreaths Across America
Wreaths Across America is a 501(c)(3) nonprofit organization founded to continue and expand the annual wreath-laying ceremony at Arlington National Cemetery begun by Maine businessman Morrill Worcester in 1992. The organization’s mission – Remember, Honor, Teach – is carried out in part each year by coordinating wreath-laying ceremonies in December at Arlington, as well as thousands of veterans’ cemeteries and other locations in all 50 states and beyond. 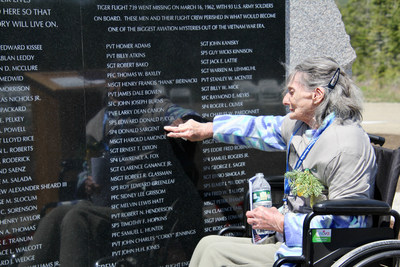