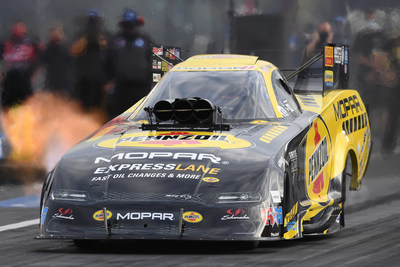 The National Hot Rod Association (NHRA) Camping World Drag Racing Series is headed to Texas this week for the 34th annual Mopar Express Lane SpringNationals Presented by Pennzoil, returning to its original early-season date at Houston Raceway Park after a rescheduled fall edition took place last October. The sea-level drag strip located near Baytown, a suburb of Houston, is known for high-horsepower performances and record runs when cool air blows in from the Gulf of Mexico.

«We’re thrilled to be back on the track with our partners from Pennzoil for the Mopar Express Lane NHRA SpringNationals,» said Mark Bosanac, North America Vice President, Mopar Service, Parts & Customer Care. «We look forward to cheering on our drivers as they compete for wins while showcasing the Mopar brand to ultra-passionate drag racing enthusiasts.»

This weekend’s competition marks the first of five NHRA national events supported by Mopar and Dodge//SRT title sponsorship during the NHRA’s 70th anniversary season. The four other upcoming national events which will see the brands’ support in 2021 are:

The Houston venue will be appropriately dressed for spring with the yellow, white and blue signature look of Mopar Express Lane brand signage. This signage is synonymous with the speedy in-and-out, high-quality, factory-backed service by certified technicians who keep customer vehicles in tip-top shape while providing everything from convenient oil changes to complimentary multi-point check-ups.

During the May 21-23 event, fans will be invited to visit Mopar’s exhibit at the track’s Manufacturers Midway where they have the opportunity to feel the thrill of being in the driver’s seat aboard an actual Dodge Charger SRT Hellcat Redeye Funny Car simulator.

«I’m pumped up to get to Houston,» says Hagan. «That’s where I got my first NHRA Funny Car win, so it will always have a special place in my heart. Houston always brings a great crowd, it’s a great facility and it’s a Pennzoil race track. There’s nothing better than going to your partner’s event at a partner’s track and we really want to put on a great show.

«I have a great race car underneath me and it’s handling well and responding to the changes we’re making to it,» adds Hagan, who goes into this weekend fourth in the standings with a runner-up and semifinal finish after four events. «We’re coming off of a hard knock in Charlotte and just focused on redeeming ourselves in Houston. We’re excited to see all of the folks down there in Baytown and it should be a fun weekend.»

Hagan’s DSR teammate, Capps, has taken home four Wally trophies from Houston (2006, 2007, 2015 and 2017) during his 27-year tenure and came close to adding another at the October 2020 edition with a runner-up finish. Capps has qualified in the top-five at every event so far this year but would like to have four solid runs on Sunday aboard his Dodge Charger SRT Hellcat to secure a fifth win at the venue and his first of the season to help him move up from his fifth place standing in the Funny Car points.

Meanwhile, fellow Dodge Charger SRT Hellcat driver Cruz Pedregon has three wins of his own at Houston (1992, 1998, 2013) and is working to build on his semifinal finish last weekend at the NHRA Four-Wide Nationals in Charlotte, North Carolina, to continue the steady progress his Snap-on Tools Pedregon Racing team has made through the first four races of the 22-event NHRA season.

DSR Top Fuel pilot Leah Pruett was pleased with her Mopar Dodge//SRT dragster’s No. 3 qualifier effort at the previous event and is looking forward to a long day of racing on Sunday after seeing her last two race days shortened by first round losses. She still has the memory of her 2017 Houston victory to fuel her drive to get back to the winner’s circle.

«I’m very excited to get to Baytown,» says Pruett, who will be getting to town early to take part in a promotional event with Dodge//SRT customers along with DSR teammate Hagan. «We get to kick off the week with Ride & Drive events with Dodge. It’s looking like we’re going to have great weather out there. It’s supposed to be cool and we’ll be at sea level, and I have no doubt we’ll be making those fast runs that get all of us hyped up.»

Pruett will also be back behind the wheel of the new 2021 Dodge Challenger Mopar Drag Pak in the Factory Stock Showdown (FSS) series at Houston for the first time since she debuted the quickest, fastest, most powerful Drag Pak ever at the 2021 Gatornationals. She posted her quickest and fastest speed ever in FSS in the season opener with her new ride, clocking a 7.806-second pass at 177.44 mph. Her goal for this outing is to get the most out of each vehicle and drive the maximum amount of runs in each category.

«I’ll be back to pulling double-duty, running both my Top Fuel dragster and Mopar Dodge Challenger Drag Pak,» says Pruett. «I truly feel like when we get to Houston it’ll be our ‘get healthy’ race and it’ll be a new beginning for us. We’re looking forward to laying down maximum horsepower on the Pennzoil proving grounds.»

Fellow DSR-prepared Drag Pak driver Mark Pawuk will also be competing in the Sportsman class event aboard his third-generation Empaco Equipment Dodge Challenger. Pawuk battled atop the FSS standings throughout 2020, finishing third overall, and after kicking off this year’s eight-race FSS series with a semifinal appearance in March he’s looking to steadily improve with each opportunity.

All on-track action at the Mopar Express Lane SpringNationals Presented by Pennzoil on Friday through Sunday will be streamed online via NHRA.TV, while television coverage will be broadcast on FS1 with qualifying shows airing Saturday, May 21, from 10-11 p.m. ET and Sunday, May 22, from noon-1 p.m. ET, while the elimination rounds will air Sunday evening from 6-9 p.m. ET.

Fans can follow all the NHRA action this season at DodgeGarage, the one-stop portal for Dodge//SRT and Mopar drag-racing news. The site includes daily updates and access to an online racing HQ, news, events, galleries, available downloads and merchandise. For more information, visit www.dodgegarage.com.

Mopar (a simple contraction of the words MOtor and PARts) offers exceptional service, parts and customer care. Born in 1937 as the name of a line of antifreeze products, the Mopar brand has evolved over more than 80 years to represent both complete vehicle care and authentic performance for owners and enthusiasts worldwide.

Mopar made its mark in the 1960s during the muscle-car era with performance parts to enhance speed and handling for both on-road and racing use. Later, the brand expanded to include technical service and customer support. Today, Mopar integrates service, parts and customer-care operations in order to enhance customer and dealer support worldwide.

For more than 100 years, the Dodge brand has carried on the spirit of brothers John and Horace Dodge. Their influence continues today as Dodge shifts into high gear with muscle cars and SUVs that deliver unrivaled performance in each of the segments where they compete.