LONDON, Sept. 15, 2021 /PRNewswire/ — New BRITA research has revealed just under one in five (17%) Brits – the equivalent of nine million – admit to leaving litter at the beach, with Gen Zs aged 16-24 the biggest offenders (35%). The findings come as a new study by leading marine charity, Whale and Dolphin Conservation (WDC), supported by BRITA, has uncovered whales and dolphins are suffocating on the sheer volume of plastic entering our seas, with plastic now affecting 81% of species. 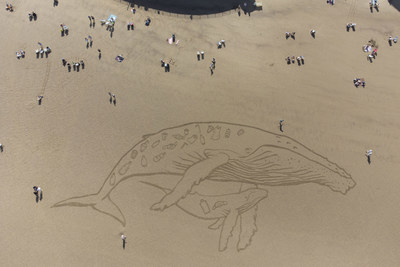 The Message in a Bottle report highlights that plastics have been shown to negatively affect whales’ and dolphins’ ability to feed, digest, navigate, breathe, breed and migrate, however less than half (45%) of the UK population think whales and dolphins are harmed as a result of single-use plastic rubbish, with almost one in ten (9%) believing no marine life suffers at all.

Ignorance surrounding the impact of plastic pollution remains widespread, with only one in five (21%) Brits believing their rubbish ends up in the ocean, and the majority (59%) thinking the UK’s coastlines are less affected by the issue, believing that marine life is harmed more elsewhere in the world by litter.

Yet the majority (56%) of Brits notice litter when visiting the seaside, with an alarming one in five (22%) noticing rubbish every time they go. To highlight the issue and the report’s findings, a powerful and heart-wrenching sand art image of a 50m long whale and her calf filled with plastic waste has been captured on Whitby beach, North Yorkshire.

The report, launched to mark World CleanUp Day, also reveals that plastic not only pollutes our ocean, affecting more whale and dolphin species with every year, but it also exacerbates climate change. Fewer whales and dolphins mean more carbon in the atmosphere, with one whale equating to thousands of trees in terms of carbon capture.

The rise in UK staycations this year is also cause for concern due to the nation’s propensity to litter, with two-thirds (61%) of the nation opting to stay in the UK, and coastal breaks the most popular option for holidaymakers (31%) in 2021.

But alarmingly over half (52%) of those surveyed say they take disposable products to the beach, while the most common types of rubbish being discarded are food wrappers (13%), plastic bags (11%) and plastic bottles (9%). However, one in ten (11%) admit their main reason for littering is seeing rubbish already present at the beach, which in turn furthers the problem.

The report finds that the number of whale and dolphin species known to be affected by marine litter has increased profusely, from 28 out of 75 in 1997, to 73 of the 90 whale and dolphin species recognised today. And while plastic waste has long been a problem, production of plastic waste has increased worldwide during the pandemic, meaning urgent action is needed to stem the tide.

Julia Bradbury, TV presenter and WDC Patron, said: «WDC’s study shines an important light on the scale, and impact, of marine litter, however BRITA’s research has shown there is still a lack of understanding about the impact of our plastic waste here in the UK. We hope that this new report helps to educate the public and raise awareness of the issue, and encourage people to limit their use of single-use plastics.»

Rebecca Widdowson, Marketing Director of BRITA UK, said: «Single-use plastics are having a detrimental impact on our ocean, with severe repercussions for whales and dolphins and also climate change. BRITA UK is proud to be working with WDC to bring the results from this report to everyone’s attention, and highlight the important steps we can all take to help protect these beautiful marine species and also ensure the ocean can continue to fulfil its vital role in the fight against climate change.»

BRITA UK and WDC are urging consumers to help save whales and dolphins from increased plastic pollution whilst ensuring nature’s carbon absorbing machine, the ocean, can continue to thrive. The ocean’s ability to mitigate global warming through carbon capture relies on us all to take a stand. This is not someone else’s problem – we all need to make small changes, like reducing and reusing, to protect whales, dolphins and other marine species and help fight climate change.