WILMINGTON, Mass., April 27, 2021 /PRNewswire/ — The No. 9 UniFirst Chevrolet Camaro ZL1 1LE, driven by NASCAR’s 2020 Cup Series champion Chase Elliott, will be hitting the track for its second appearance of the 2021 season at the Buschy McBusch Race 400 on Sunday, May 2, at Kansas Speedway in Kansas City, Kansas. The race begins at 3:00 p.m. EST and will be televised on FOX Sports 1 (FS1). 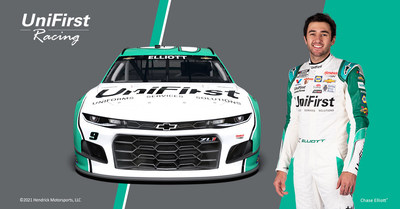 UniFirst Corporation (NYSE: UNF), a North American leader in providing customized work uniform programs, corporate attire, and facility service products, is once again serving as the primary sponsor of the No. 9 Hendrick Motorsports team for multiple races during the 2021 NASCAR Cup Series season. The revised UniFirst Chevrolet made its season debut on March 14 at Phoenix Raceway, with Elliott rallying to finish in fifth place.

Following a successful 2020 season that saw Elliott pilot the UniFirst Chevy to a first-place finish and the $1 million grand prize at the renowned All-Star Race, UniFirst and 13-time NASCAR Cup Series champion Hendrick Motorsports introduced a revamped design of the No. 9 UniFirst Chevrolet Camaro ZL1 1LE for the 2021 campaign. The refreshed Chevy is highlighted by the company’s signature green color, eye-catching black and white contrasts, and NASCAR-inspired design cues.

«UniFirst is thrilled to be partnering with the 2020 Cup Series champions, Chase and Hendrick Motorsports, for the 2021 season,» said Adam Soreff, director of marketing and communications for UniFirst. «They provided us and all their fans with such excitement and countless memories over the past year, and we’re looking for more of the same this Sunday.»

Elliott has gotten off to a solid start to the 2021 NASCAR season. Through ten races, NASCAR’s Most Popular Driver currently sits eighth in the standings, having collected three top-five finishes and one stage win while leading for a total of 76 laps.

«We’ve had a lot of success in the UniFirst No. 9 Chevy and I can’t wait to keep that rolling in Kansas this weekend,» Elliott said. «I’m hoping the revamped UniFirst Chevy will put on a good show for everyone. Kansas is such a fun track, so I’m looking forward to the race.»

Elliott has had plenty of success racing at Kansas Speedway throughout his career. He secured a first-place finish at the track back in 2018, collected four top-five finishes, and led 145 laps in his 10 starts at the 1.5-mile oval.

The 2021 NASCAR season marks the fifth year of UniFirst’s multi-year partnership with Hendrick Motorsports, and the company’s second year sponsoring Elliott and the No. 9 team. UniFirst also continues to be the Official Workwear Provider of Hendrick Motorsports, supplying work clothing and uniforms to the team, as well as to its sister company, the Hendrick Automotive Group.

UniFirst’s next race of the 2021 NASCAR season will be held at Daytona International Speedway on Saturday, Aug. 28, at 7 p.m. EST, televised on NBC.

Headquartered in Wilmington, Mass., UniFirst Corporation (NYSE: UNF) is a North American leader in the supply and servicing of uniform and workwear programs, as well as the delivery of facility service programs. Together with its subsidiaries, the company also provides first aid and safety products, and manages specialized garment programs for the cleanroom and nuclear industries. UniFirst manufactures its own branded workwear, protective clothing, and floorcare products; and with 260 service locations, over 300,000 customer locations, and 14,000 employee Team Partners, the company outfits more than 2 million workers each business day. For more information, contact UniFirst at 800.455.7654 or visit UniFirst.com.